A colleague of mine, John Ellis, in the graphic design department at Colchester Institute had persuaded Abram Games to come and give a lecture on his work. We had a packed lecture hall and Abram’s talk was a huge success. At lunchtime, we walked to a local pub. It wasn’t until we were sitting down that I realised that John, Abram and myself had been joined by someone else. He was, apparently, a friend of Abram’s, short but strongly built, he seemed shy and unwilling to get involved in the conversation. Not a designer I assumed.

I asked Abram if he would do a similar performance the following year, he agreed, all went swimmingly well and once again at lunchtime (but at a different pub) the same quiet chap sat down with us. This time I made of point of asking his name; ‘Romek Marber’. He spoke softly and what seemed, at first, hesitantly, and so I asked him to repeat it. ‘Romek Marber’. Hearing his name was a shock. I was leaning in quite close to catch what he said and must have shot backwards to take in the whole figure – who was suddenly much larger – sitting in front of me. I was so shocked I did not know what to say. I had bought a stack of Romek’s Penguin book covers, in second-hand bookshops, not to read but to line the shelves of my student digs (many years previous). This time it was Romek who had to get the conversation started.

At this point I have to explain that the Colchester School of Art had recently arranged to take over the running of the Minories Gallery; a beautiful Grade II-listed building in the centre of the town and, for an all too brief period (about five years) we had an exceptional programme of fantastic exhibitions including ‘Graphic Art and the Art of the Illustrator’, ‘Underground Maps Unravelled’ ‘Book Arts’ and an Abram Games retrospective (as well as painters and sculptors, of course).

I knew that Romek had been unwilling to go back to Poland since he had had to flee for his life during the Second World War. But I had recently been to art colleges in Wadowice and Krakow to give lectures and workshops and whenever I mentioned Romek’s name everyone knew of his work in the UK and thought of him as a cultural hero for Poland. I wondered if Romek was aware of this.

Romek came to give a talk at the college, again the hall was packed to the rafters but he gave a brilliant performance, full of grace and charm but also with a steely sense of determination. At lunch, I told him about the positive reaction I had received when mentioning his name in Poland, to which he gave me a quizzical look. I changed the subject and asked him if there was the chance of us mounting an exhibition of his work at The Minories, and his face lit up. We arranged to meet at his cottage and that was the first time we really had the chance to talk for many hours about graphic design and typography. It was great fun and we met many times after that usually in Colchester. (I remember meeting him at the Firstsite Gallery, when he told me he had just put his car in for a service and walked the two miles, mostly up-hill, to meet me; this was his way of he celebrating his 90th birthday!) Dates for the exhibition were set, and, perhaps best of all, everything was going to be organised, mounted, framed, captions created and the catalogue designed by his partner Orna Frommer-Dawson (Romek knew that I knew Orna – a highly respected graphic and exhibition designer – and he could not resist giving me a mischievous smile on mentioning her name.)

I wrote to my friends in Poland to ask if there was the possibility of our exhibition travelling to Krakov or Warsaw and their response was that they would do everything they could to make it happen. Whilst those plans were still being finalised Bruce Brown offered to take the exhibition to the School of Art, Brighton University, straight from The Minories. True to her word Orna did a magnificent job, and the private view was perfect, lots of famous faces, several speeches in which plaudits were thrown around like confetti, and a touching speech by Romek in which he said how much he had always wanted to have an exhibition in the magnificent Minories Gallery.

Bruce did a great job at Brighton for Romek and I think he helped to oil the wheels in getting the exhibition transferred to Poland. I couldn’t get there but I know Romek had considerable feelings of trepidation before travelling but thrilled at the enthusiastic welcome he received. So was I.

In 2013, The Minories, Colchester exhibited a retrospective of graphic work designed by Romek Marber for Penguin books, The Economist, New Society, Town and Queen magazines, Nicholson’s London Guides, BBC Television, Columbia Pictures, London Planetarium and others. The original concept for Romek Marber: Graphics was by David Jury, designer, author and course leader of MA Art at the Colchester Institute, and organised by Kaavous Clayton, the curator of the The Minories and ran from 31 August until 26 October 2013.

The exhibition went on to be shown at the University of Brighton and the Galicia Jewish Museum in Krakow, bringing Marber’s unique modernist visual language which has had a profound impact on British design and design education to the public.

Coincidentally, in 1968 Romek had an exhibition at The Minories called ‘Object and Owner’ organised by Crosby, Fletcher, Forbes (London), Romek was invited to submit an object other than his own work considered important or crucial for its visual appeal. It is unknown what object Romek submitted – contact us if you know. 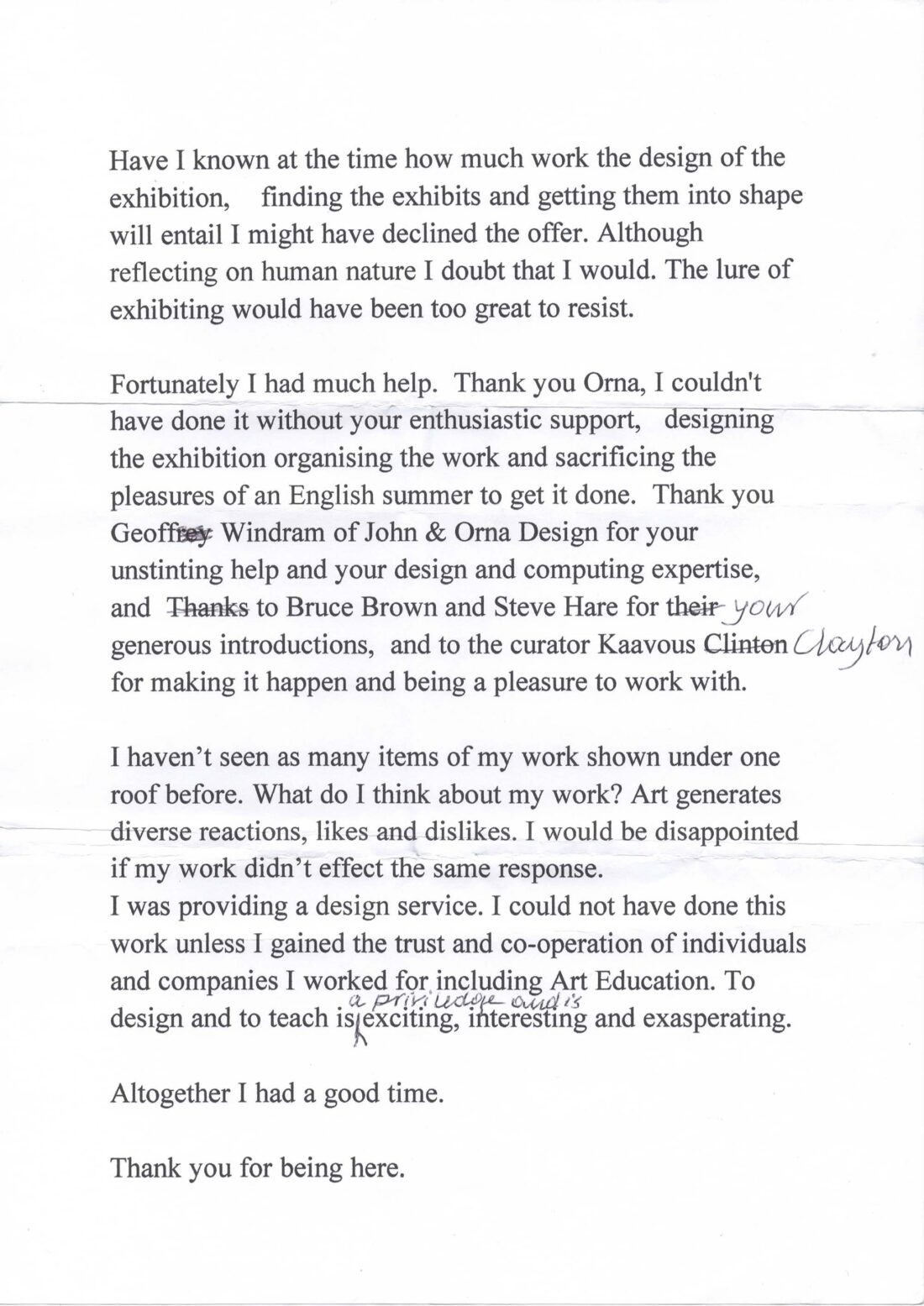 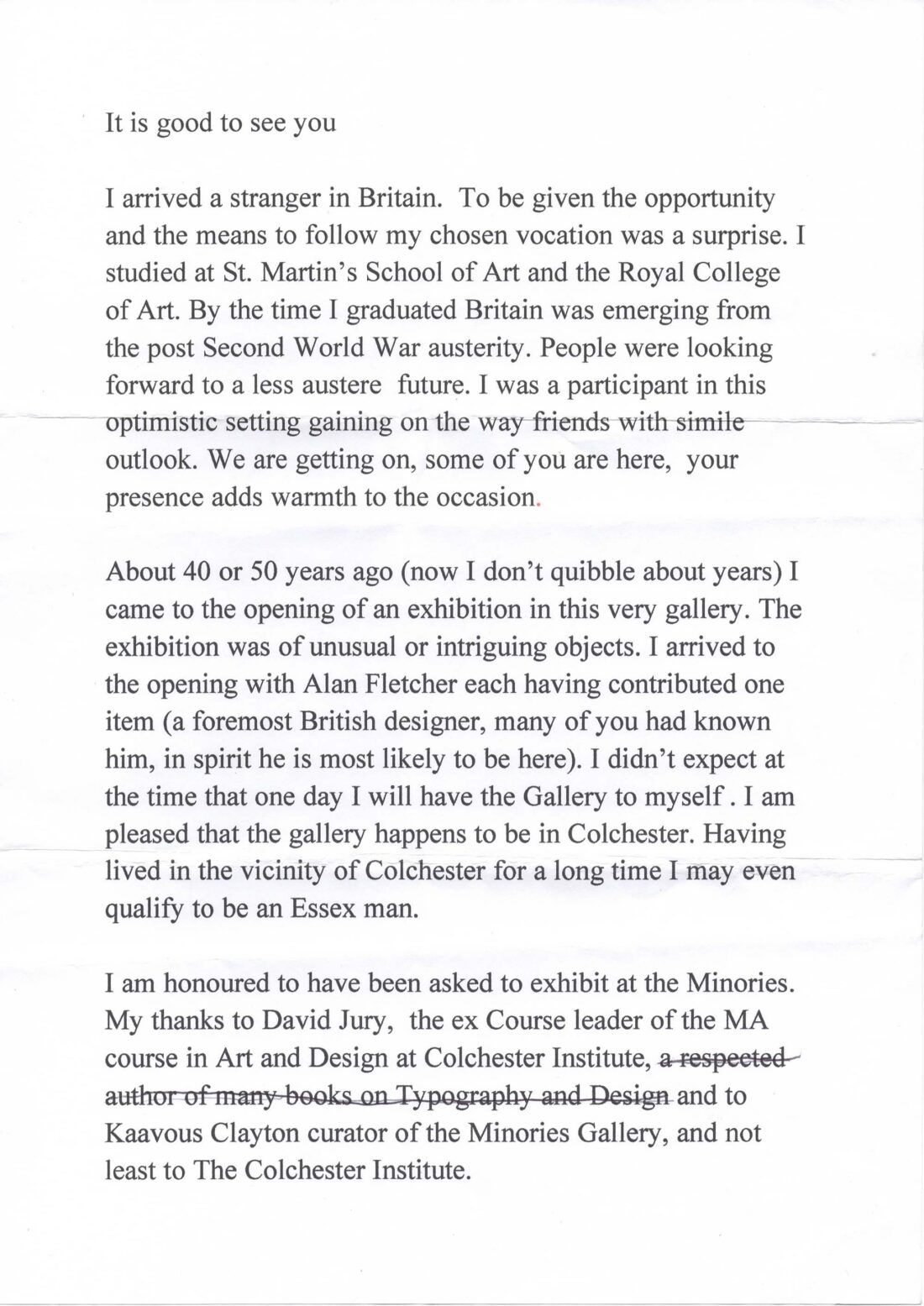 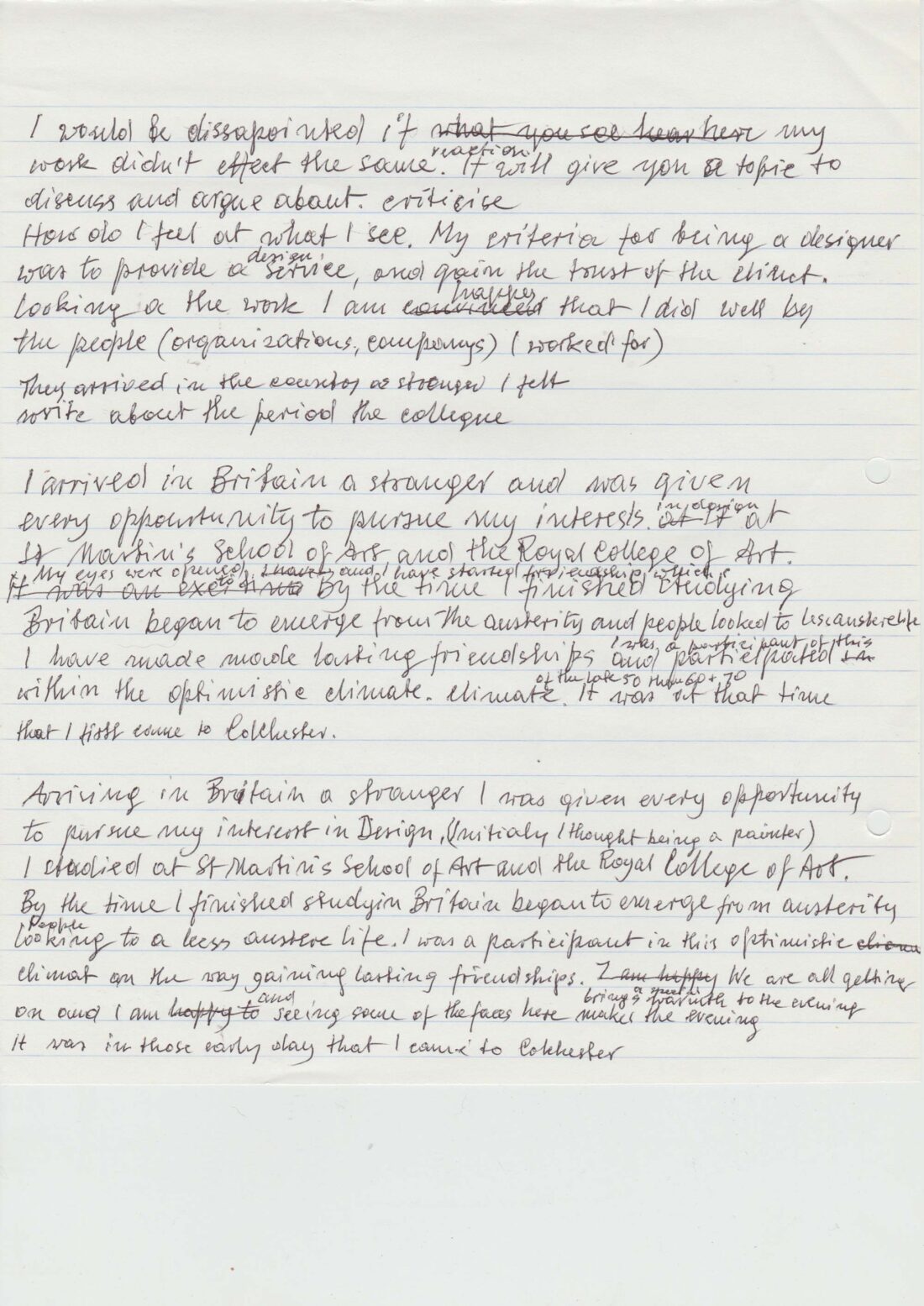 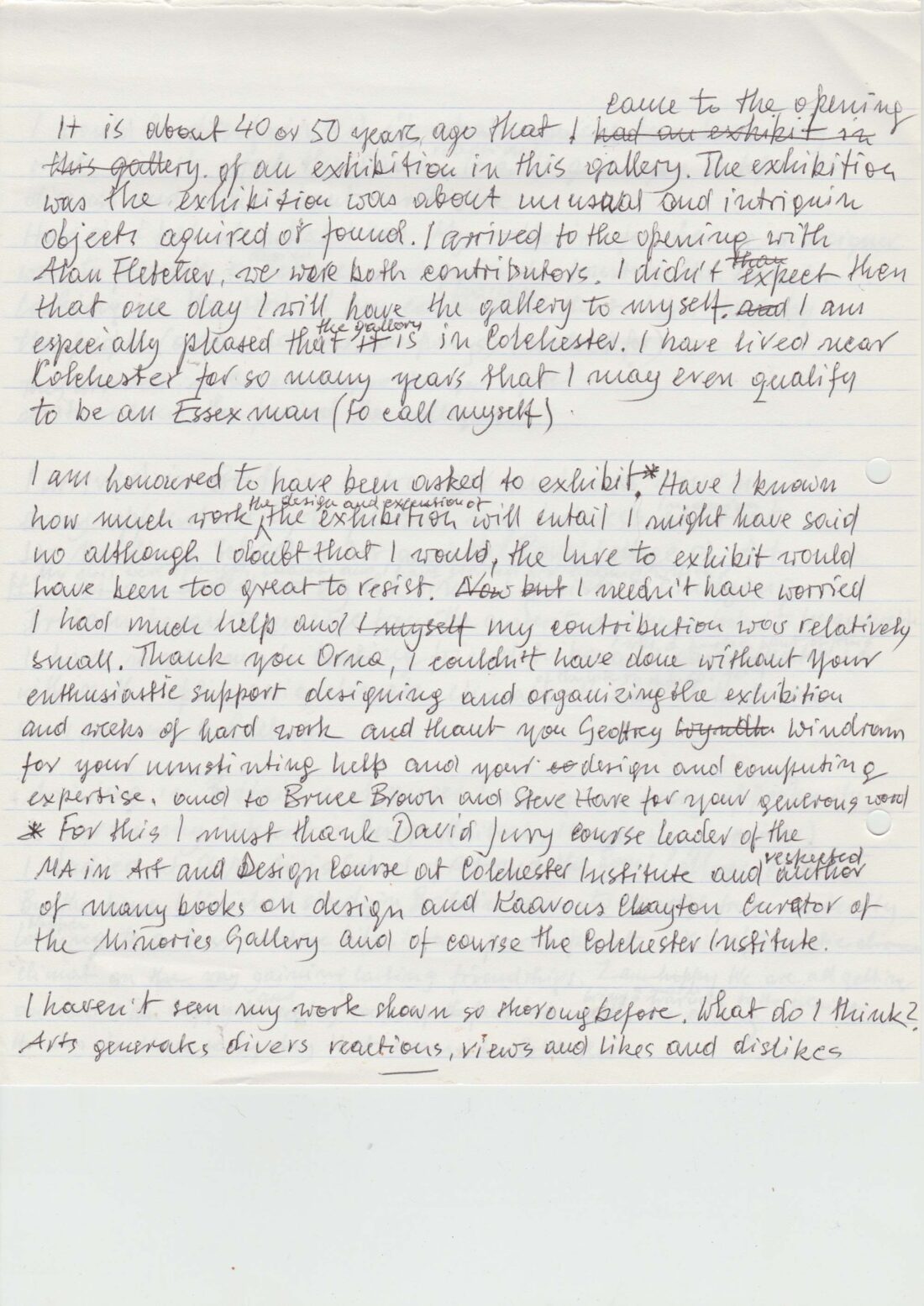 The Minories Gallery is situated in a Grade II listed building in Colchester. It is managed by the Victor Batte-Lay Foundation, which was established at the bequest of Geoffrey Butt to present his collection of art for the benefit of the people of Colchester. VBLF started organising exhibitions at The Minories in 1956, showing work by luminaries includ­ing Edward Bawden, Eric Ravilious, Lucien Pissarro, Maggi Hambling, Mark Wallinger, John and Paul Nash, Jacob Epstein and even Winston Churchill. From 1994-2008, Firstsite took on the running of the building and exhibition programme whilst they planned their new building. and in 2008 Colchester Institute’s School of Art began their tenure there, providing opportunities for their students to exhibit and experience exhibitions that would further their education.

In 2012 I was appointed as The Minories’ curator, and was keen to develop a diverse exhibition programme to explore various areas of artistic exploration from contemporary art to fashion, and product design to graphic design. As someone who was not particularly familiar with the town and its histories, I was keen to discover those working close by whose work could contribute to a critical discourse around art education and creative culture. When David Jury (course leader for the MA in Art, Design and the Book at Colchester Institute) told me that Romek Marber lived nearby and could be interested in presenting some of his work for an exhibition, my interest was piqued. There had been a Penguin book on my bookshelves for over 30 years that I had bought at around the age of 12 purely for the design of the front-cover, and it was one of Romek’s designs for the Crime Series.

Meeting with Romek to discuss the idea of an exhibition resulted in a most incredible personal journey, both creatively and emo­tionally. He was insightful, thorough, had a keen eye for detail and utterly charming. It was a privilege to work with him, as well as Orna Frommer-Dawson, Romek’s partner, who contributed her own extensive design expertise along with that of Geoffrey Windram to support the exhibition design. The result was an extensive and intimate journey through some of the highlights of Romek’s work selected from a period of over 50 years. It presented some of his striking covers for The Economist, many of his iconic Penguin Crime Series covers, and examples of beautifully detailed book and catalogue designs, but the exhibition told only one aspect of Romek’s contribution towards the field of graphic design, as his legacy lies not only in the work he created, but also in his dedication to teaching, and the experience and sensitivity that he passed on to many others that continue to be seen in design influences today.

David Jury: Romek came to give a talk at the college, again the hall was packed to the rafters but he gave a brilliant performance, full of grace and charm but also with a steely sense of determination. Read more 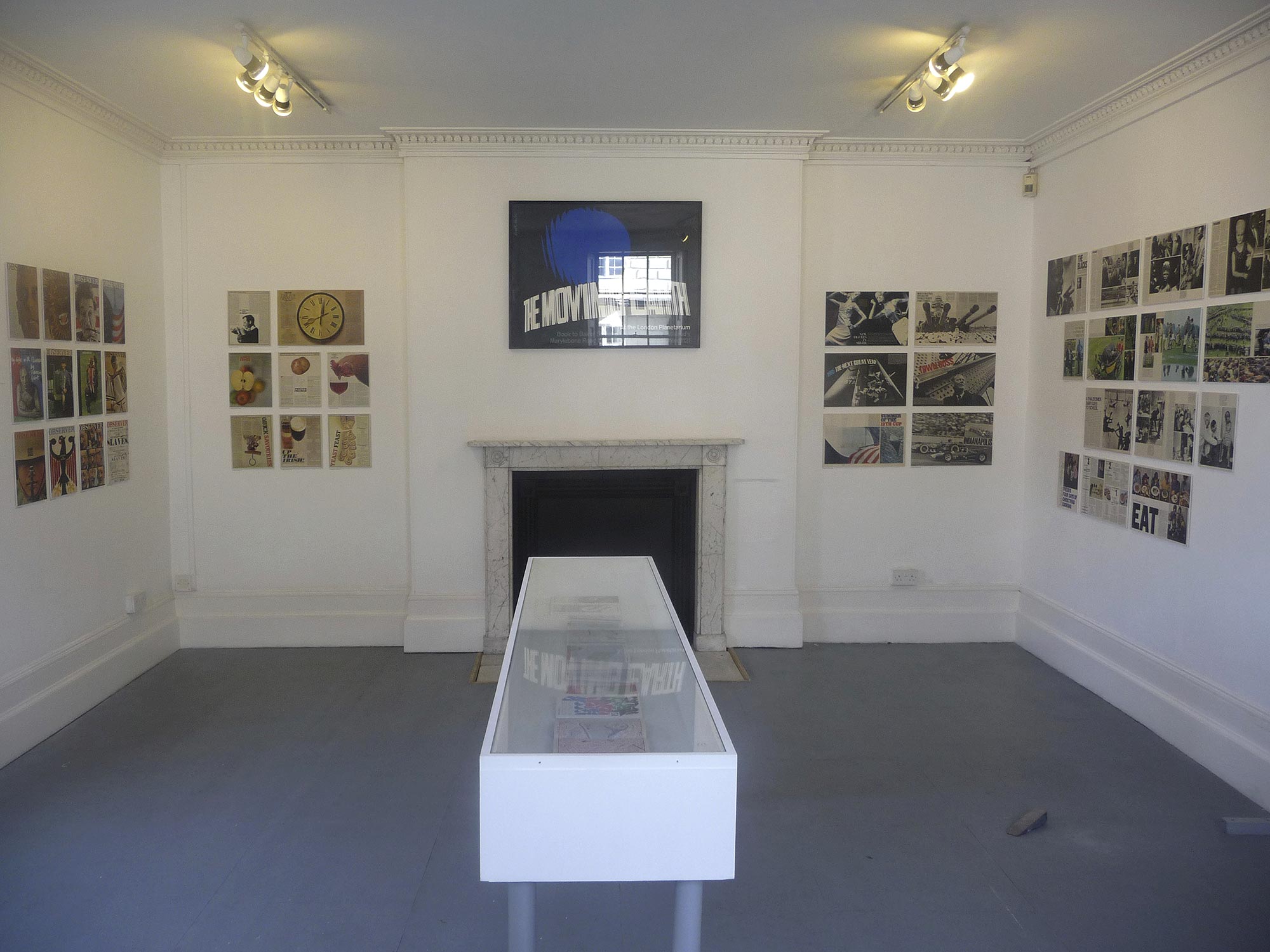 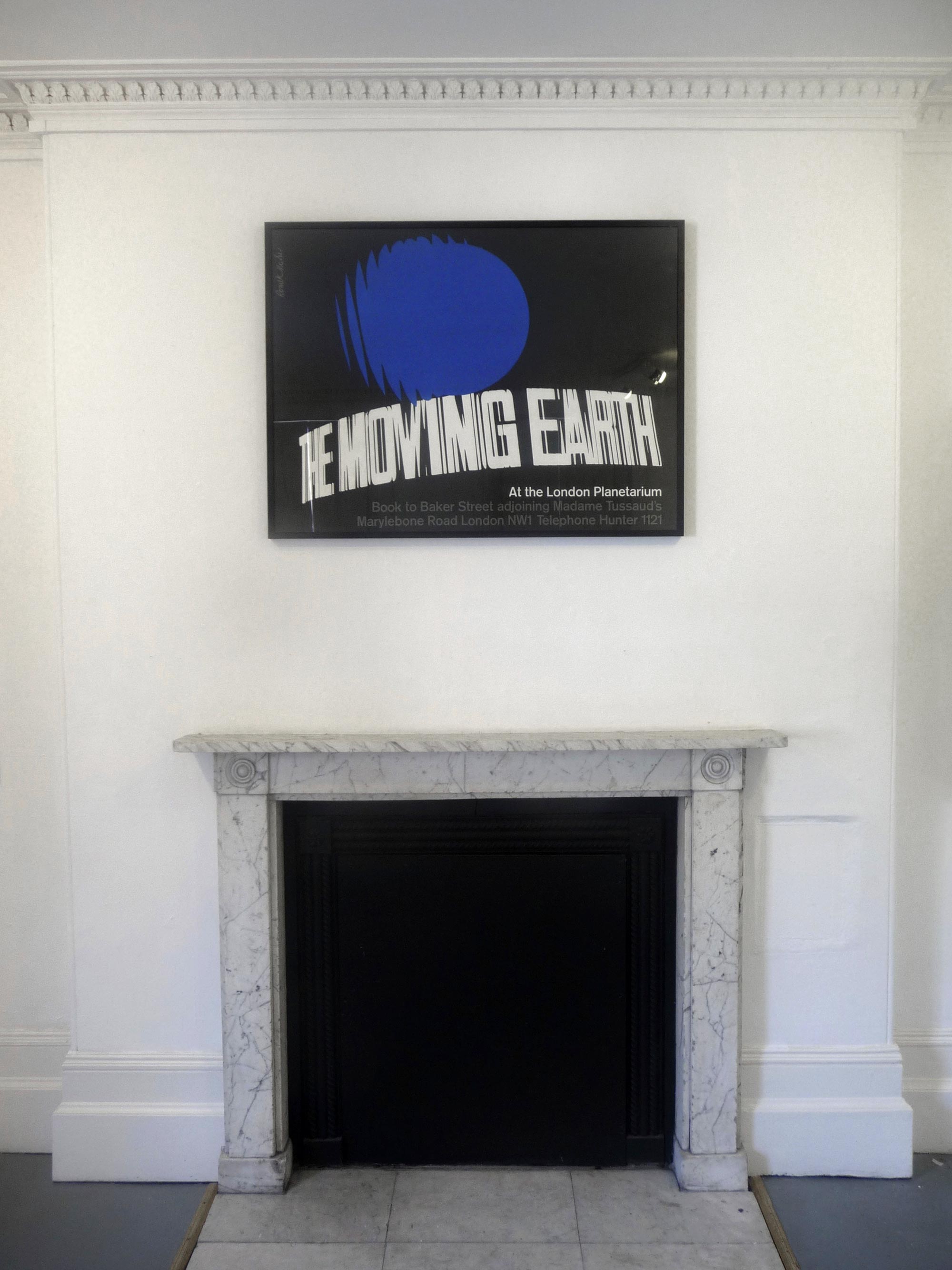 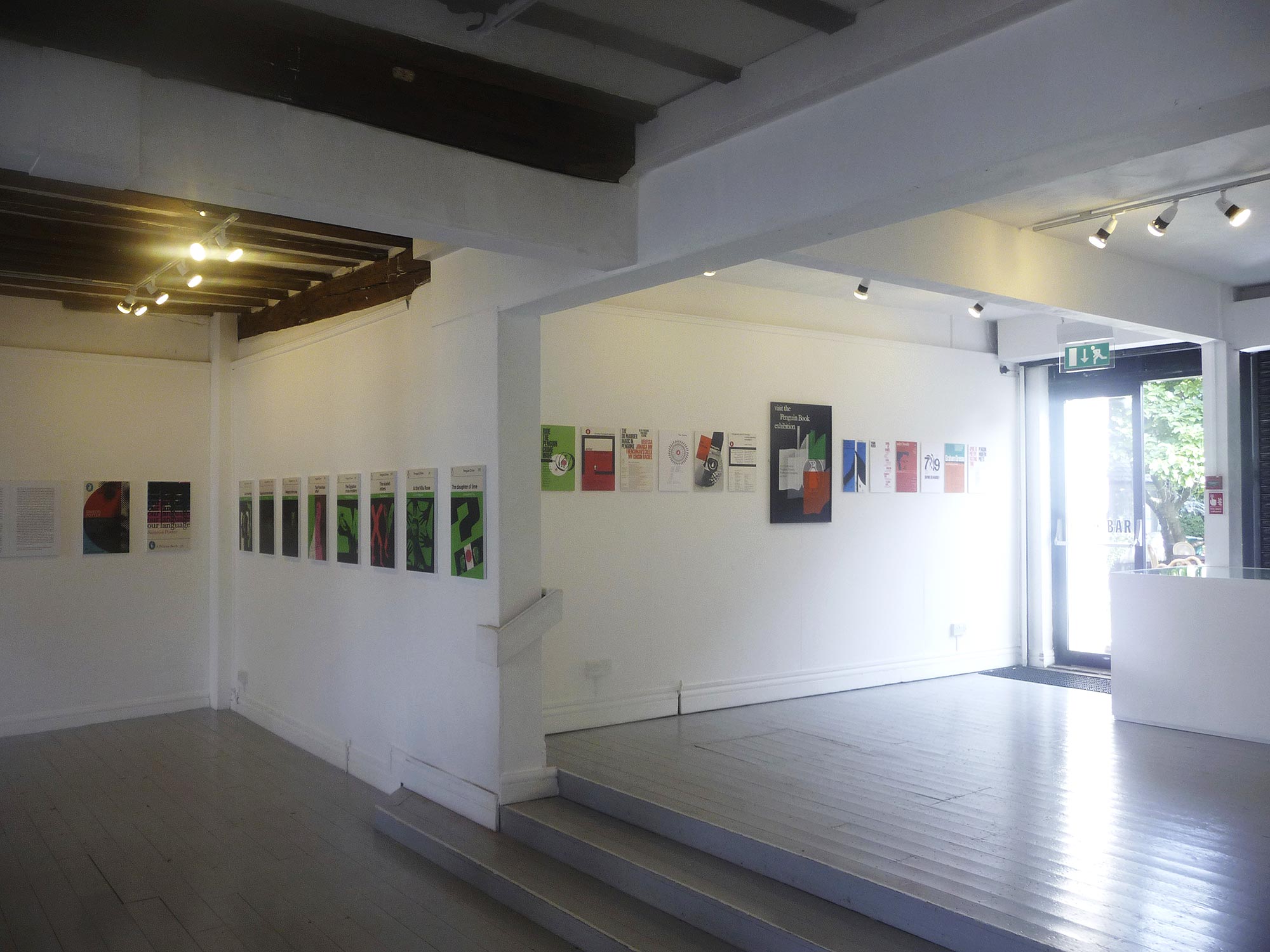