I had known Romek since the early 1960s. We were both friends of Germano Facetti, Penguin’s art director, who shared a similar past with Romek: both were survivors of Nazi death camps. Romek had a considerable reputation as a designer, and was a natural choice for Germano, as art director of covers at Penguin Books, to employ as a designer.

When I met Romek at the opening of an exhibition at the Design Museum, we had not seen one another for some years. I asked how he was, and Romek answered that he was just back from New York. Who was he working for there, I wanted to know. Oh no, no client, he said, I went to visit the Holocaust Centre. When Romek mentioned that he had written an account of his experiences in World War II for his family, I said that I would like to read it. A few days later a large plastic-bound typewritten copy arrived in the mail.

In a day or two it was clear that it should become a book. I had already published some memoirs by friends, all poets, and was lucky in having a helpful publisher, Five Leaves, who had allowed me to have a few books appear on its list but under my own imprint.

Preparing Romek’s typescript for publishing took several months. Although Romek had used the transcripts of interviews by the Holocaust Centre, I needed to become an informed editor. This demanded a great deal of reading to understand the history of the camps and their geography and to make sure, for example, that place names had consistent spelling. Romek and I exchanged notes, and he read the text at several stages. In some cases the original sequence needed rearrangement for the sake of clarity, some digressions and repetitions taken out and some of the later sections, after Romek left Germany, were shortened. Romek supplied all the illustrations, which were inserted early in the book to identify members of the family.

Every life is uniquely interesting. Romek s life story speaks for the countless numbers of those who endured unspeakable horrors, for whom there could be no return.

I am a witness to a period in the life of Polish Jews when the entire community was systematically destroyed. When I wrote this account, in 1998, I did so with reluctance. But as one of the small number of Polish Jews who survived the Holocaust I felt that I should leave a record of this part of my life: the time of my youth in Poland, the nightmare years of the German occupation and the period after liberation, up to my arrival in England. This book is also the story of my family, a story which echoes the life of many Polish Jewish families which, in contrast to my own, were totally wiped out. Few were left to recollect their lives. I wrote it for my family, and particularly for the new generation, to leave a trace of a life that was.

Here I tell about the past as I remember it. If there are any inaccuracies, factual or historical, they are unintentional and not meant to mislead. My problem has been not that of overstatement but simply to find the language to tell my story.

I originally wrote the account for the benefit of family and it was called The Candle Flickered. I also sent copies to my closest friends including the designer Richard Hollis – who was also a publisher – and he resolved to get the story into print for a wider audience.

Len Deighton, the author of spy novels including The IPCRESS File, Funeral in Berlin and Billion-Dollar Brain, was one of Romek’s oldest friends, their having met each other when both studied graphic design at the Royal College of Art. Deighton, who kindly proof-read Romek’s original draft and wrote an endorsement for the back cover of the book, wrote of No Return:

One of the most memorable books I have ever read. This memoir of a child caught up in the Holocaust is unputdownable. It tells what happens to an unprotected youngster in the fragrant peacetime days’ end, the Germans invade his homeland, and the nauseating stench of mass murder fills the air.

The simple honesty with which Romek Marber tells his story is elegant and lucid. He is careful not to exaggerate or mislead, and this gives his account an awesome power. Do read it. 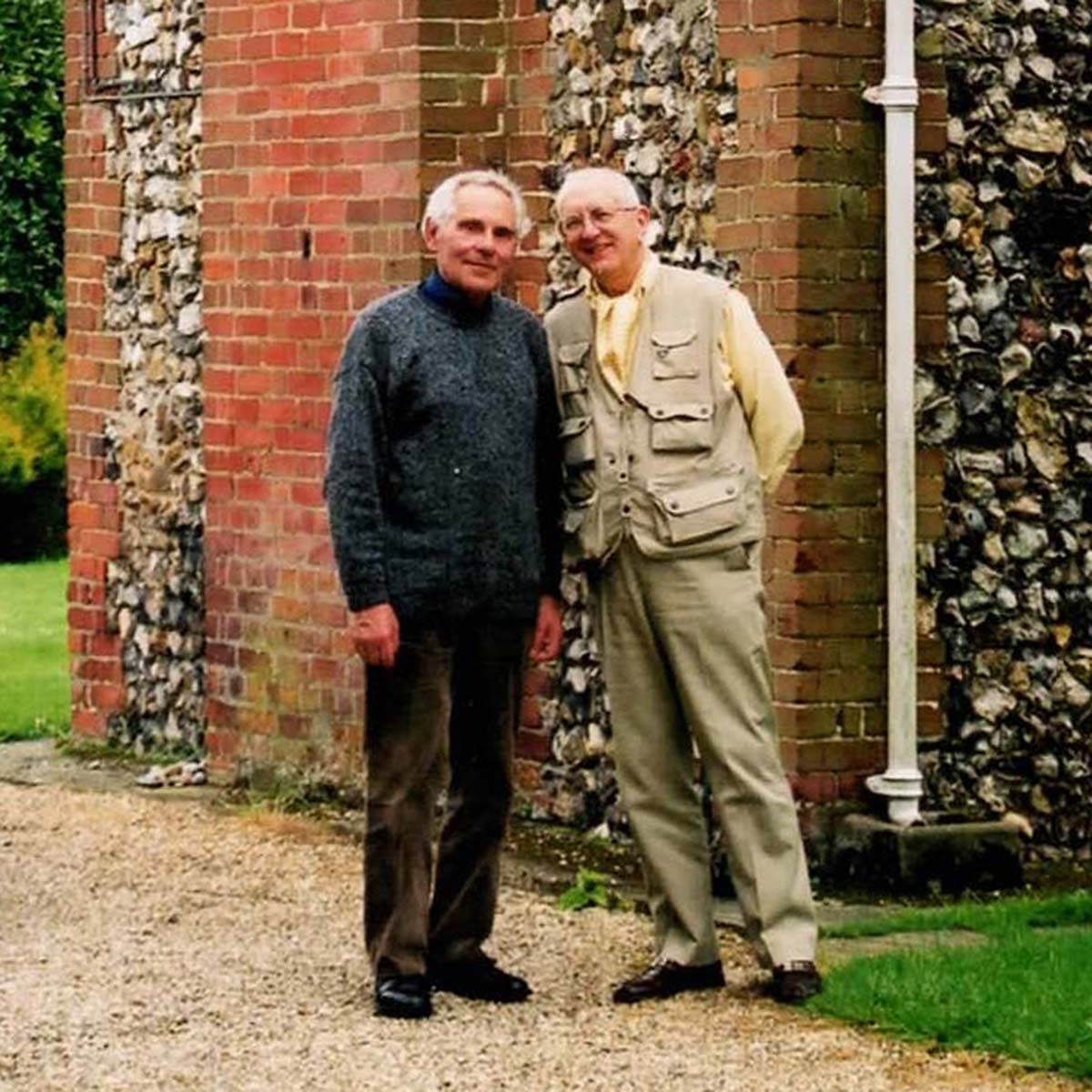 I was again reading No Return. It is so lucid and it is your simple truth that makes it so gripping – so readable and unpretentious in a way that so many professional writers fail to achieve (me included).

We live in mad times and you have seen the world as it sank to animal behaviour – and in many places does so still. But love is all ascendent
I almost forgot to mention the one-man Brighton show catalogue which is wonderful. The very wide range of your creativity can only be seen in such a collection of your work. I am a member of the Penguin Collectors Society and their periodical establishes you as a major figure in the history of Penguin.

I have just read No Return for the second time. First time round, I was fascinated by your account of the terrible privations you and others suffered in the Second World War and especially at the tragedy which so many members of your family met. I re-read it because of a remark which James Mackay made regarding the callousness of the Roman Catholics in Poland. I now realise that this was not only true of Polish catholics but of the whole Catholic Church as a religious entity. Finishing the book the day after the Christchurch massacre was very poignant and I am now amazed and, I suppose, ashamed on their behalf – I was only born in 1946 – that non-Jews allowed the murder of so many with so very little intervention and none from the established Christian churches.

I hope you are keeping well. 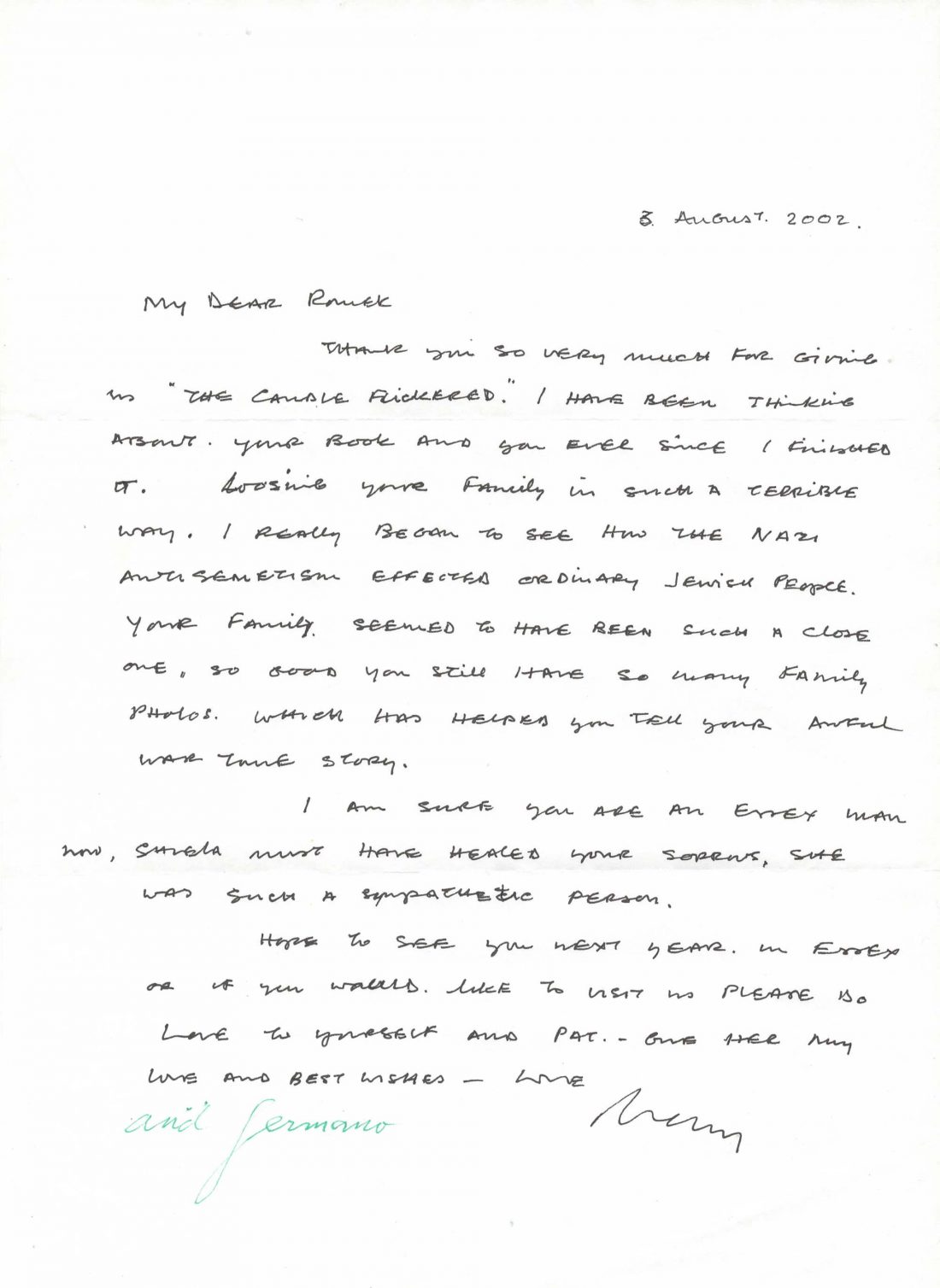 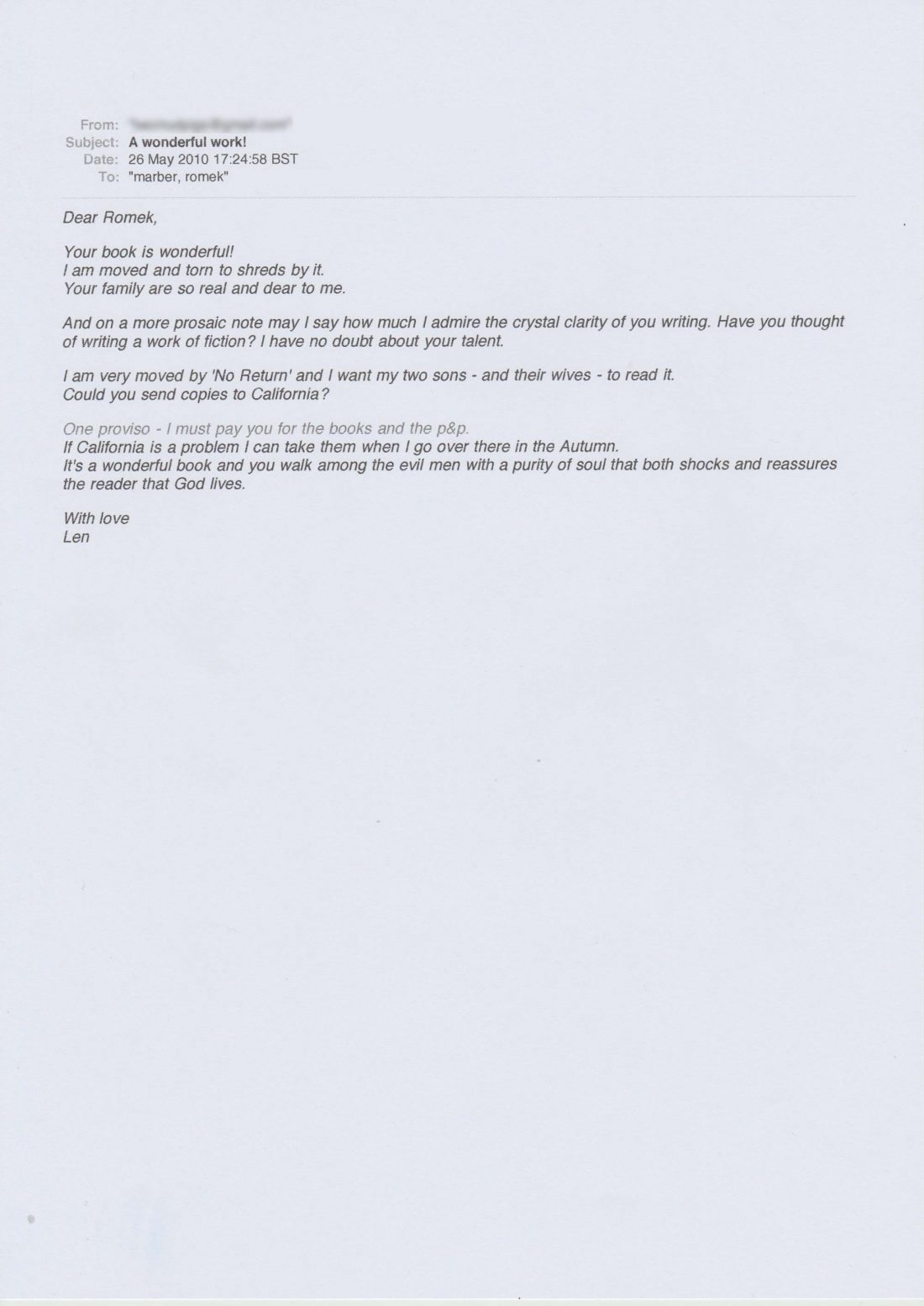 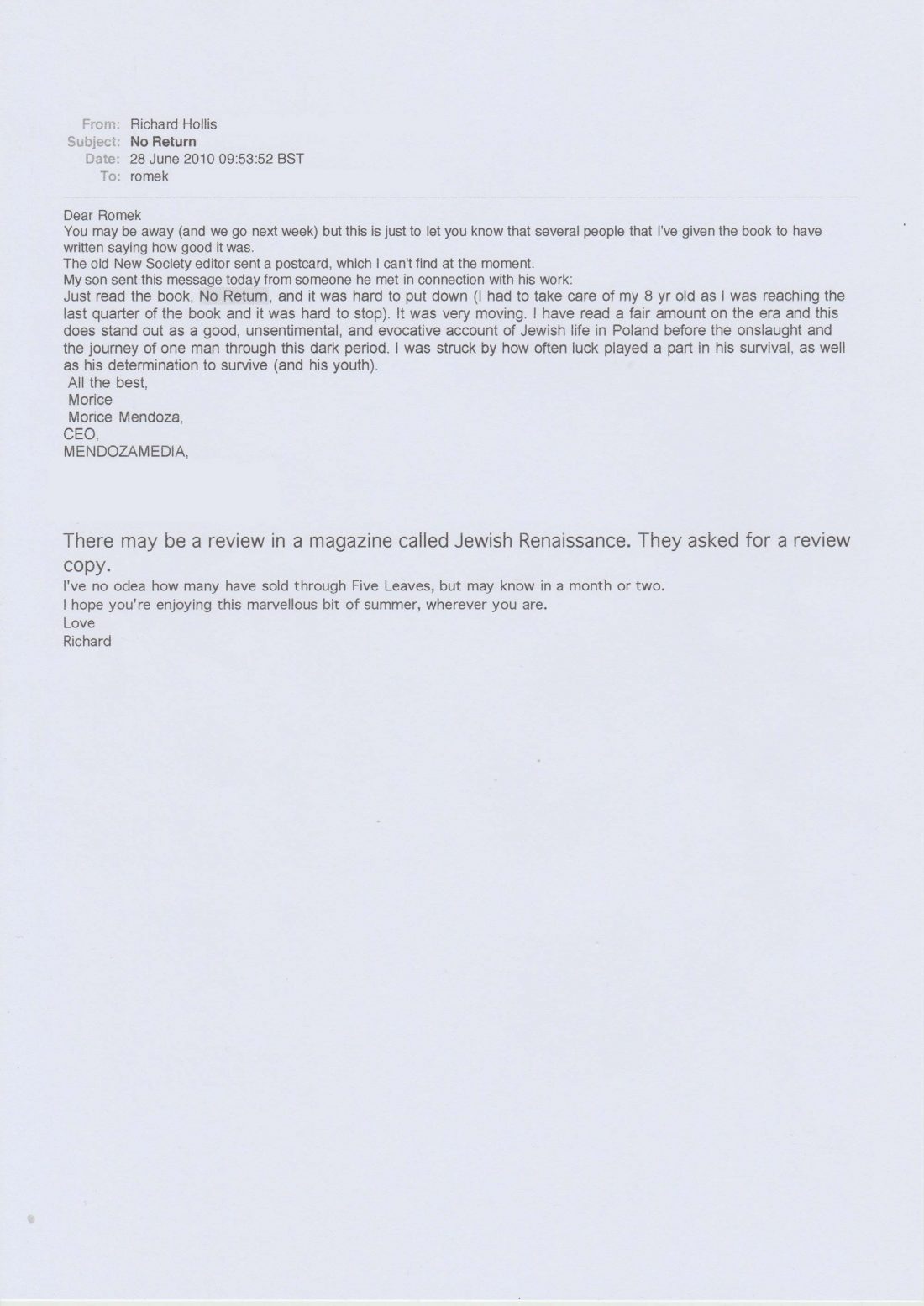 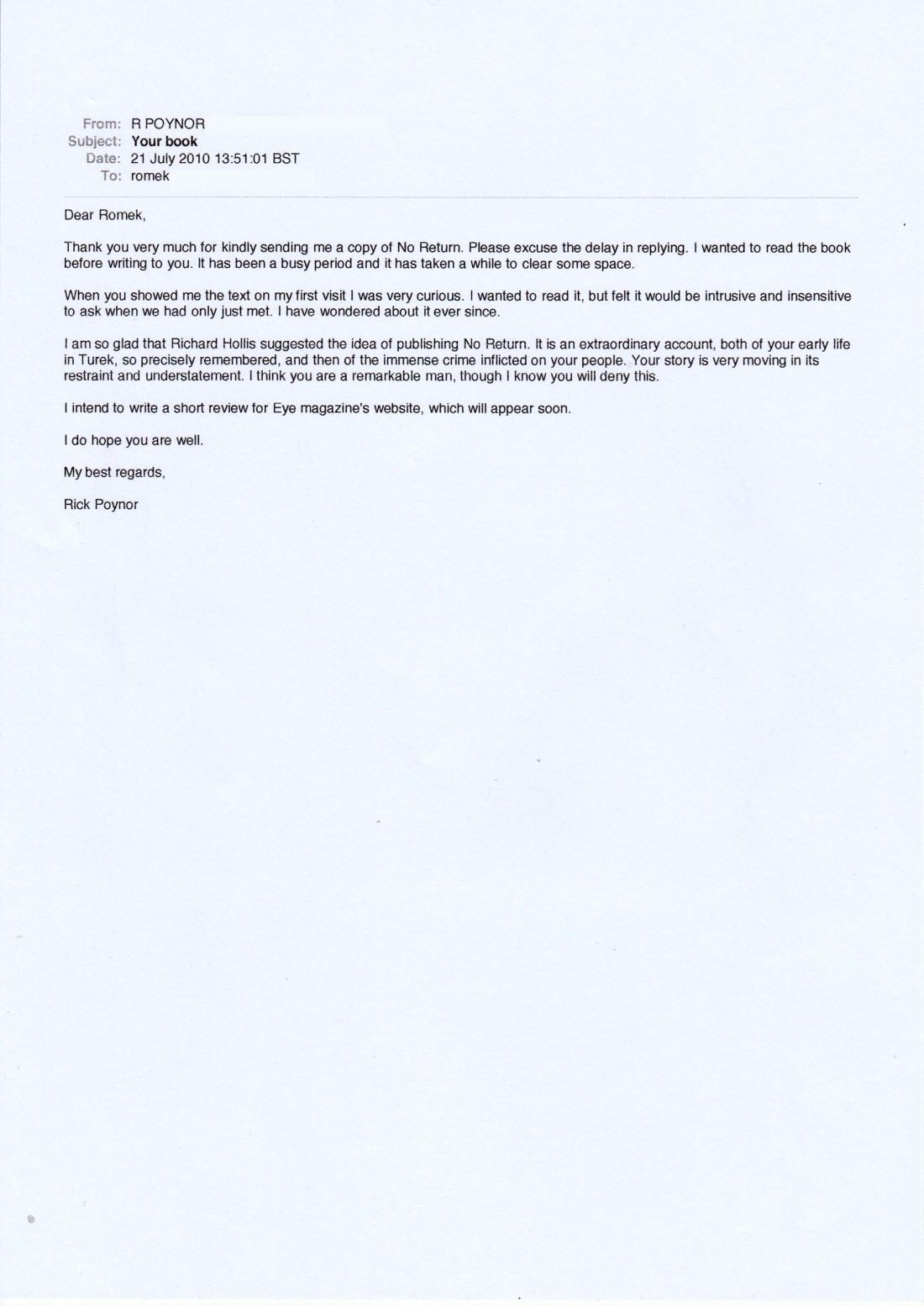 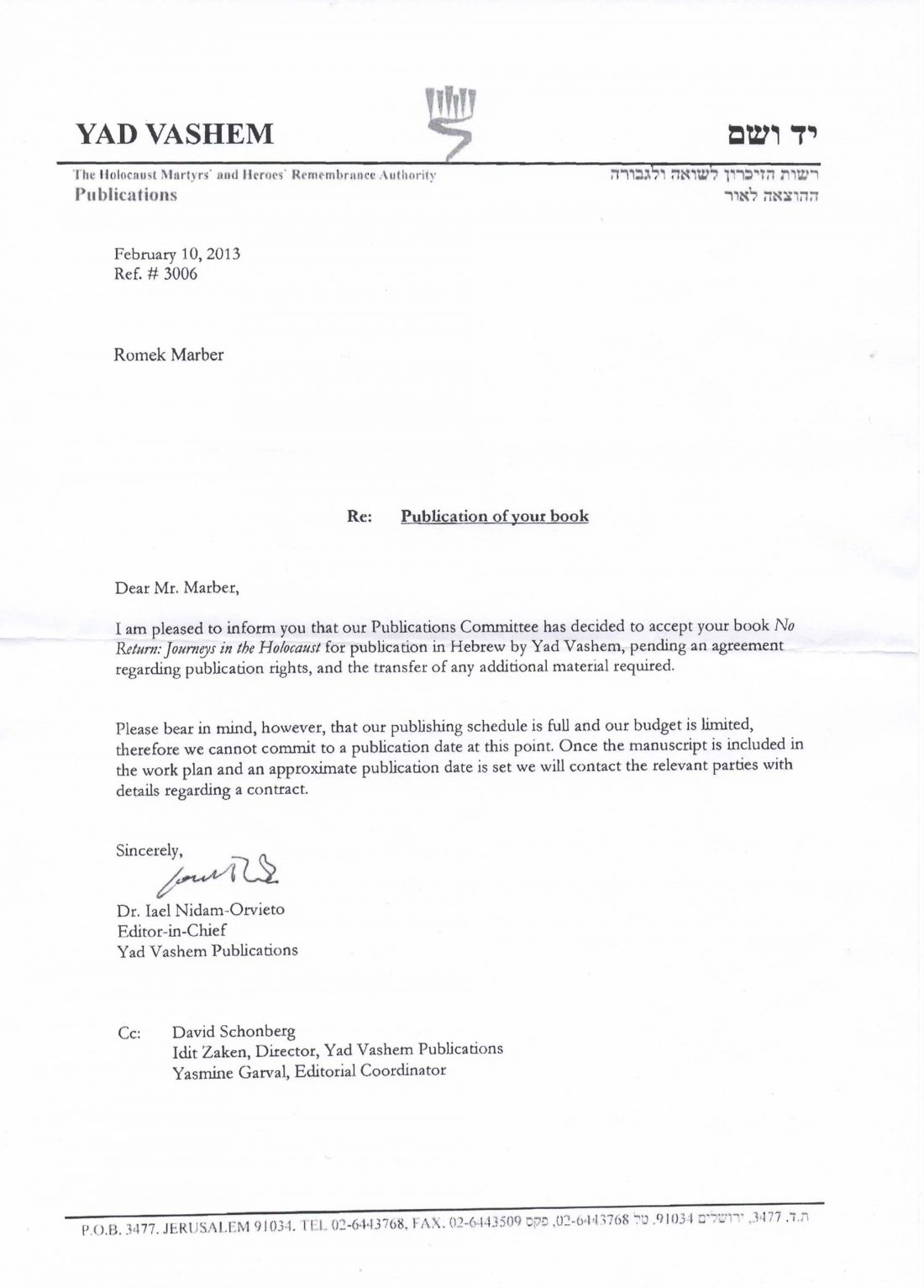 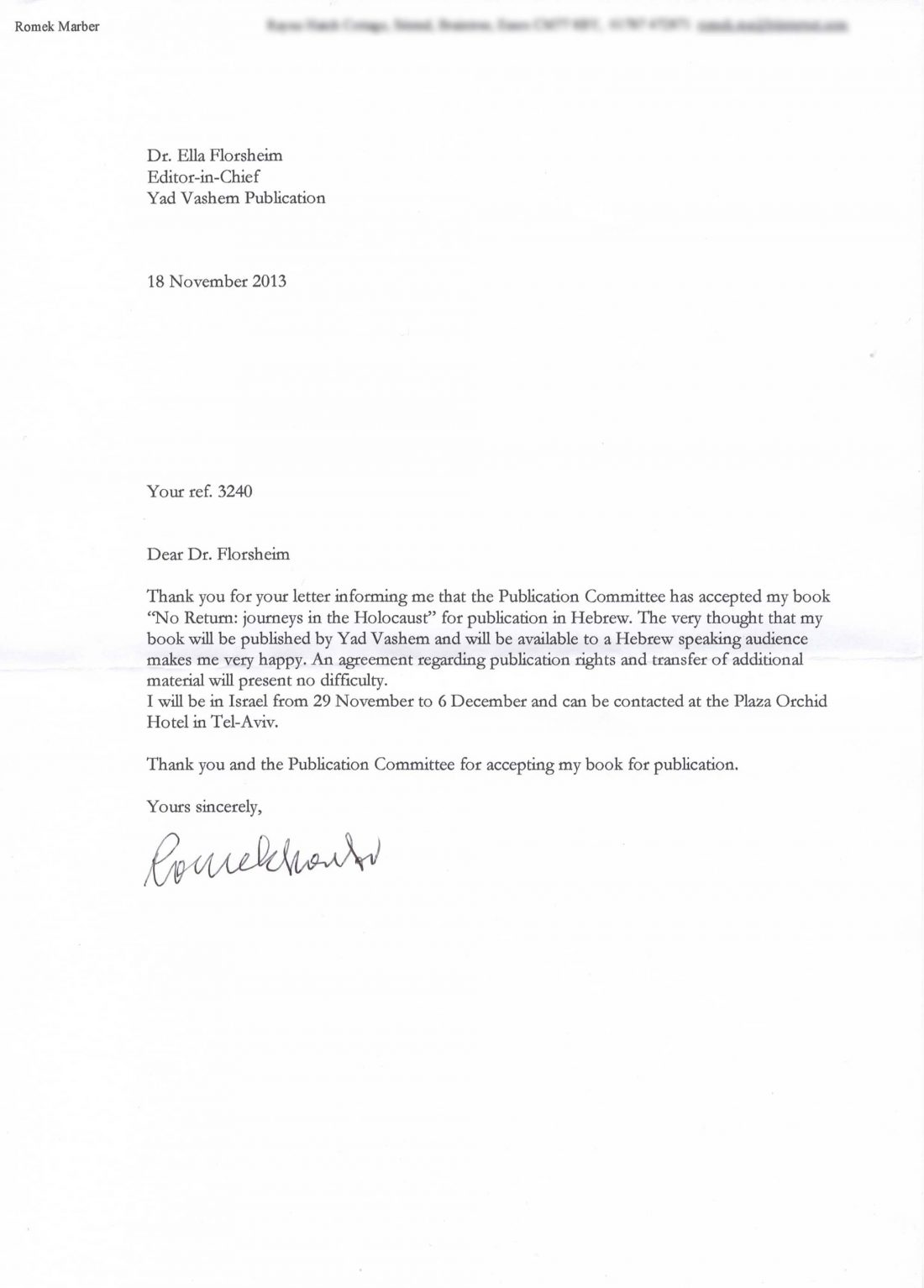 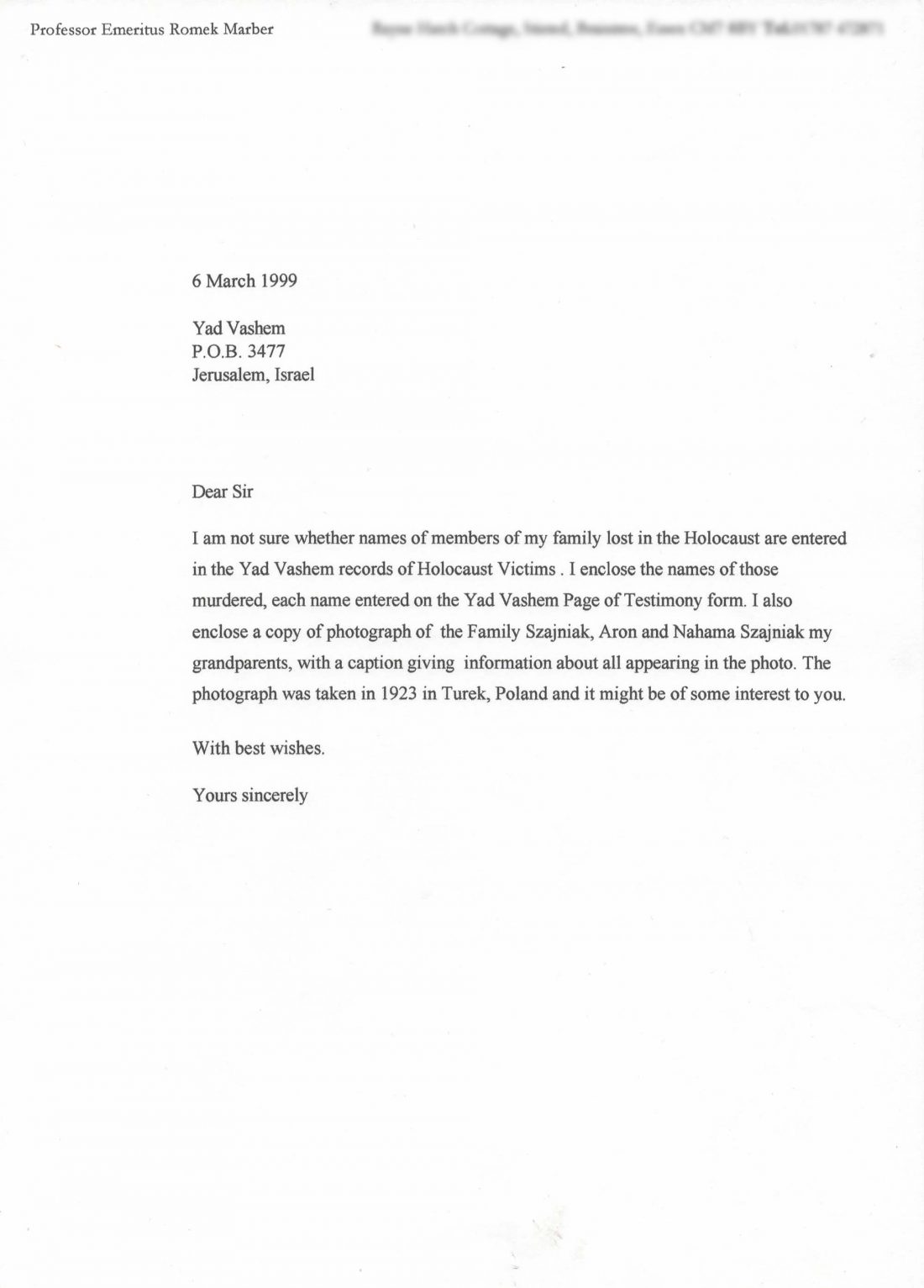 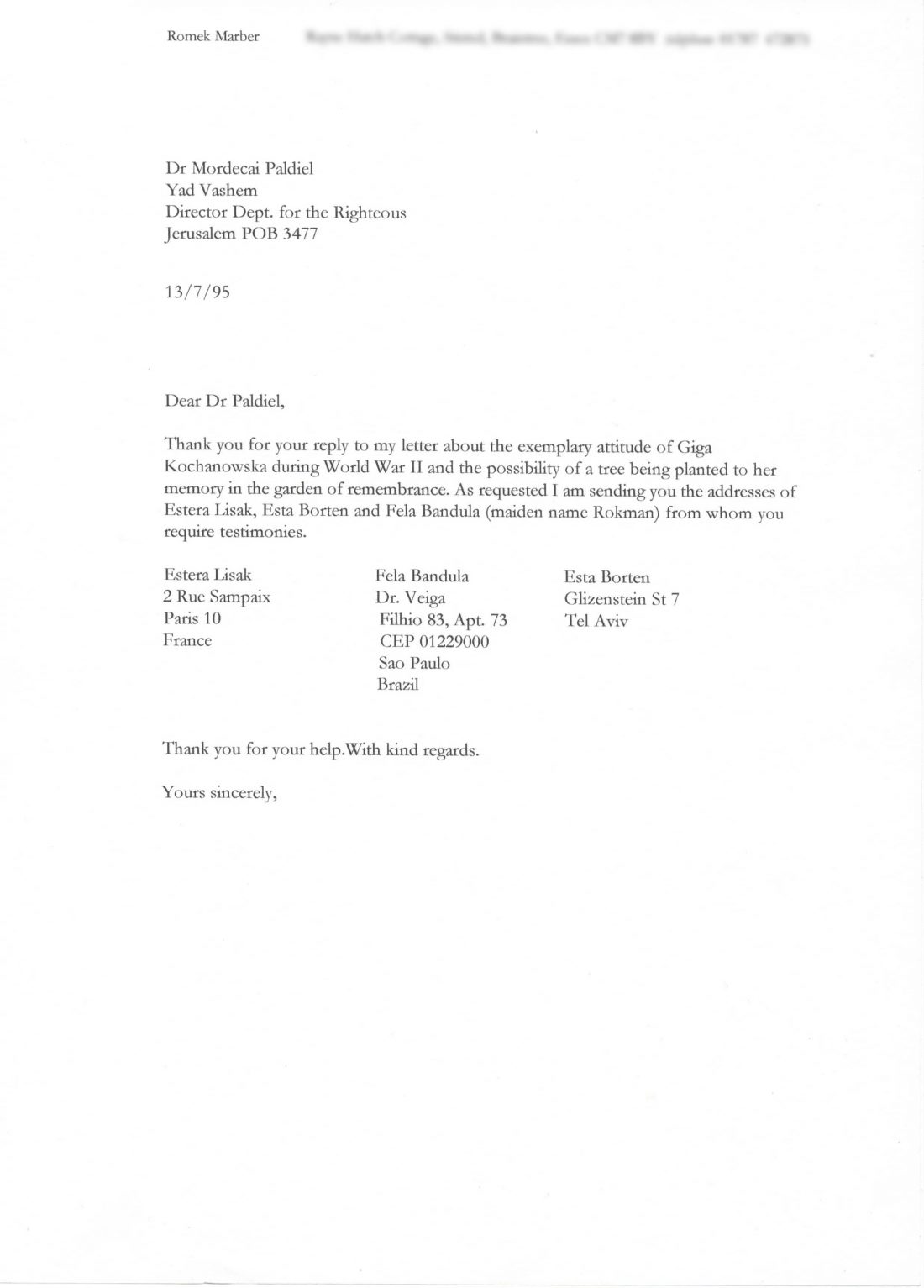 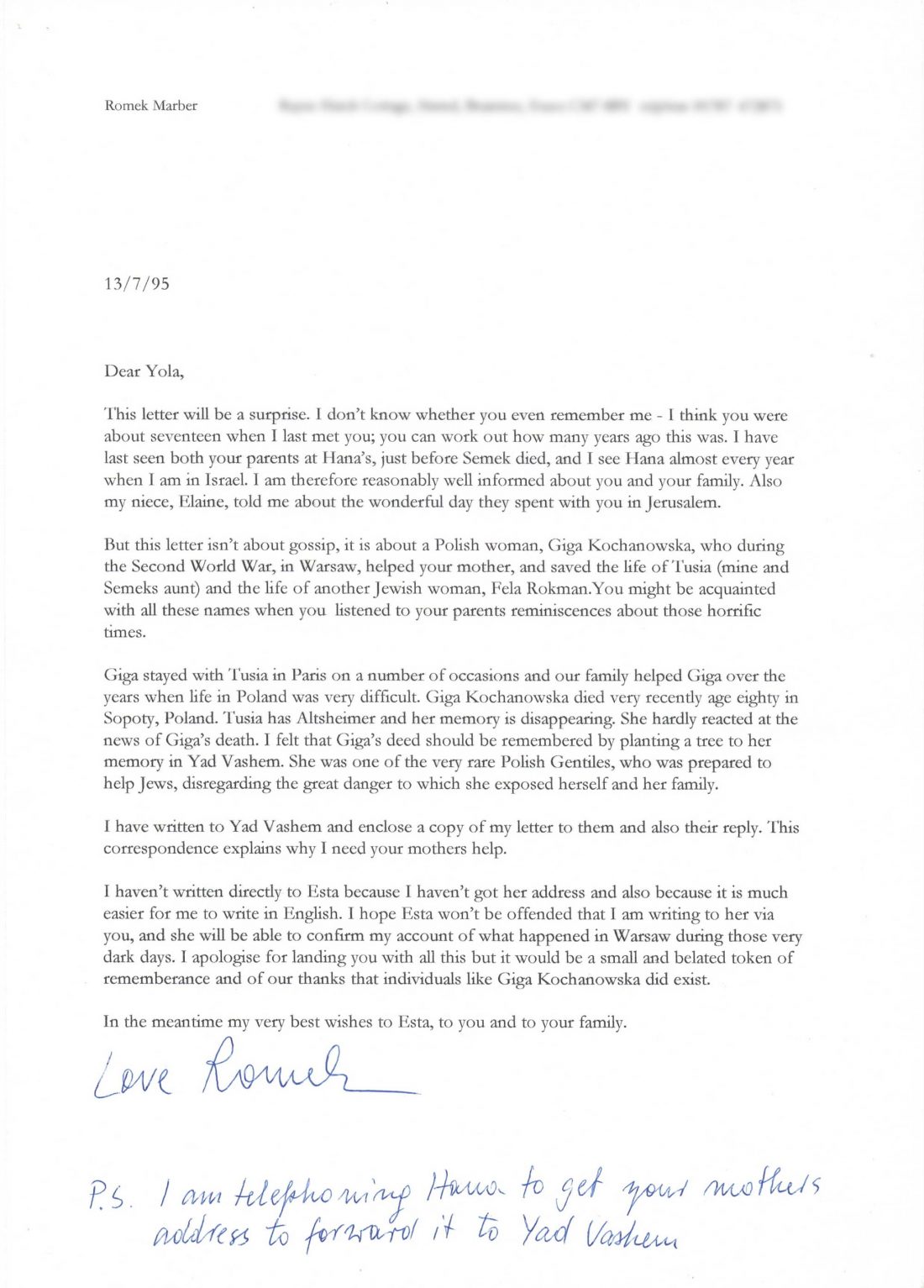 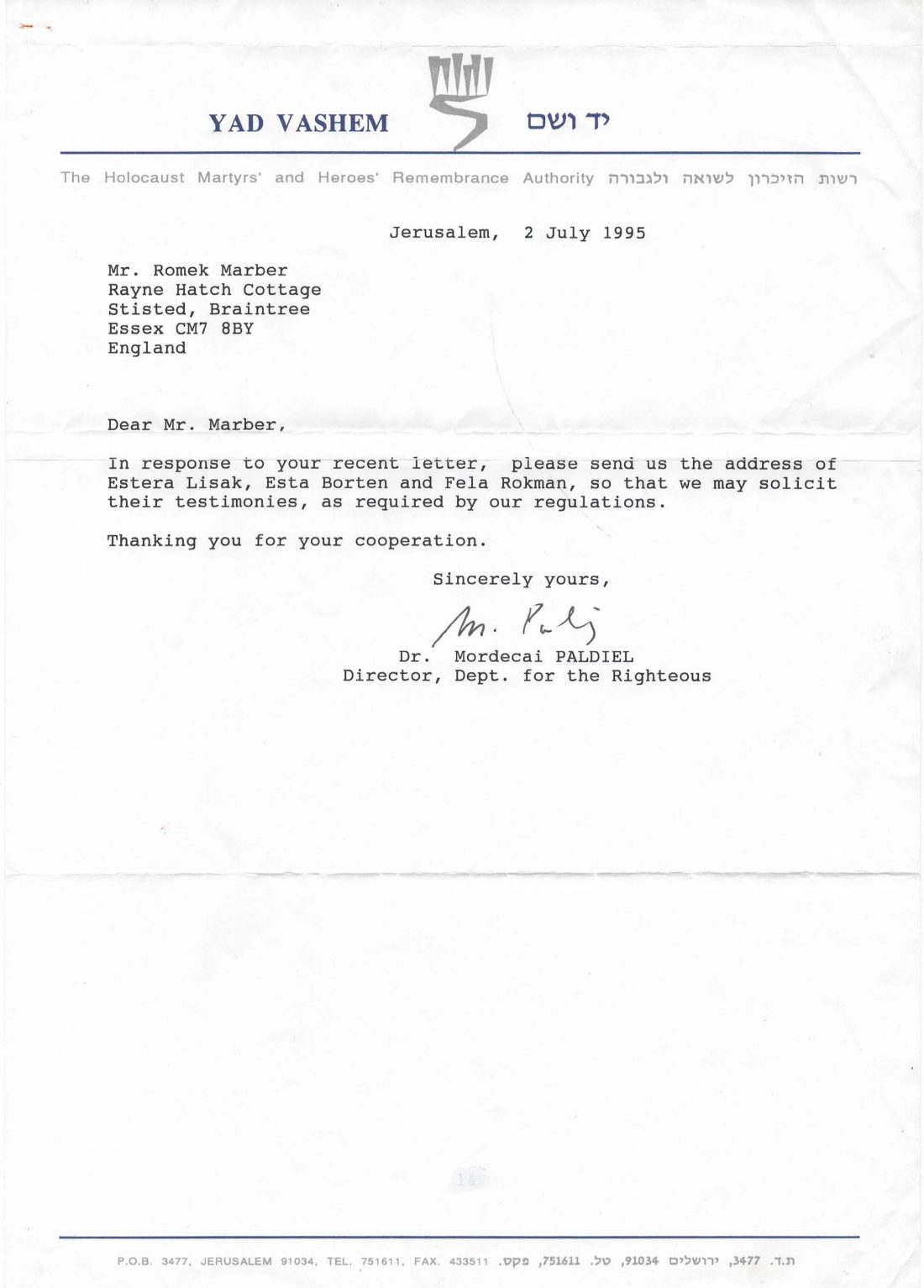 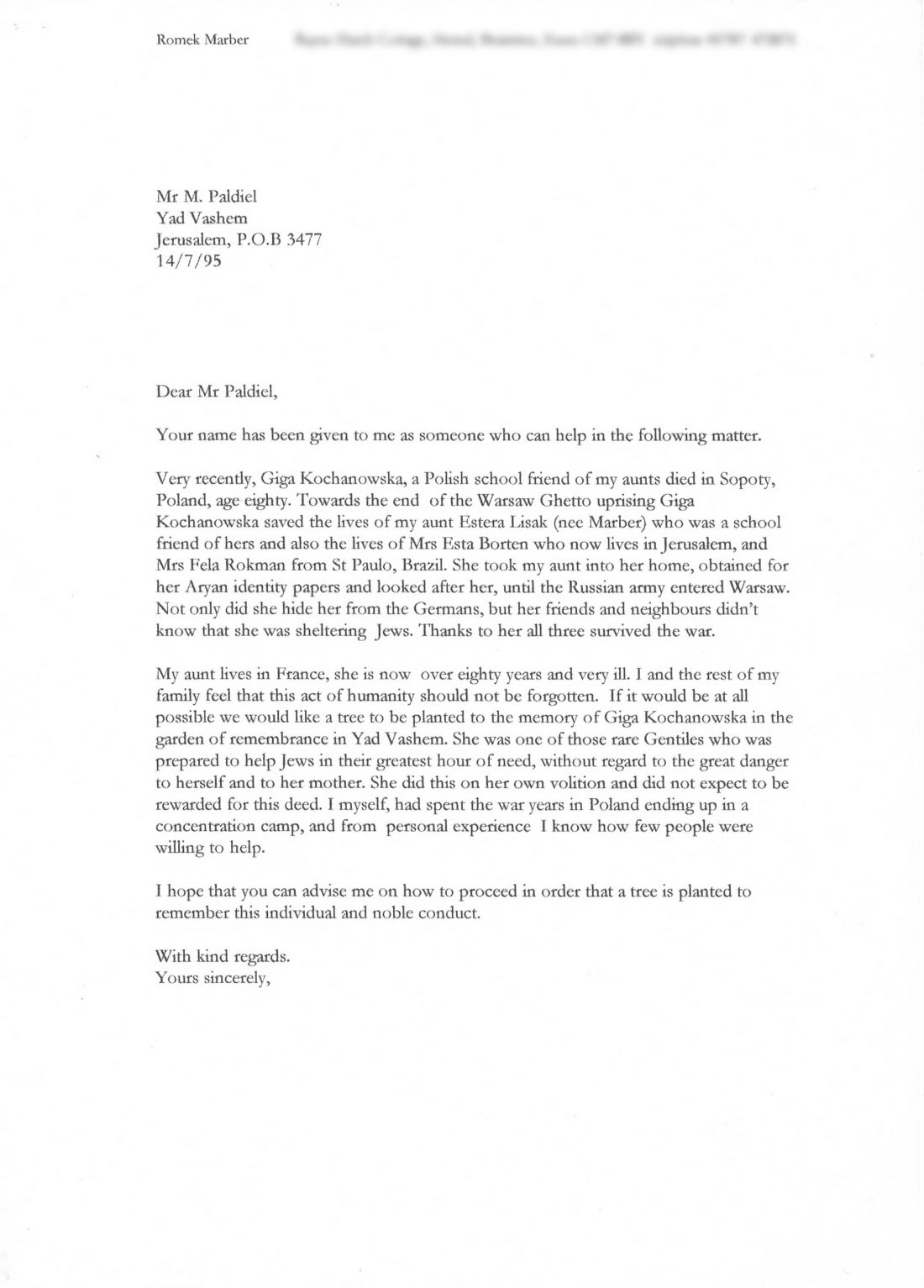 Len Deighton was Romek’s longtime friend since their student days together studying graphic design at the Royal College of Art. When Romek first wrote The Candle Flickered for his family, Len gave invaluable encouragement and thoughtful suggestions for the text. When No Return was eventually published by Richard Hollis in 2010, Len generously wrote a testimonial endorsing the book for its back cover. 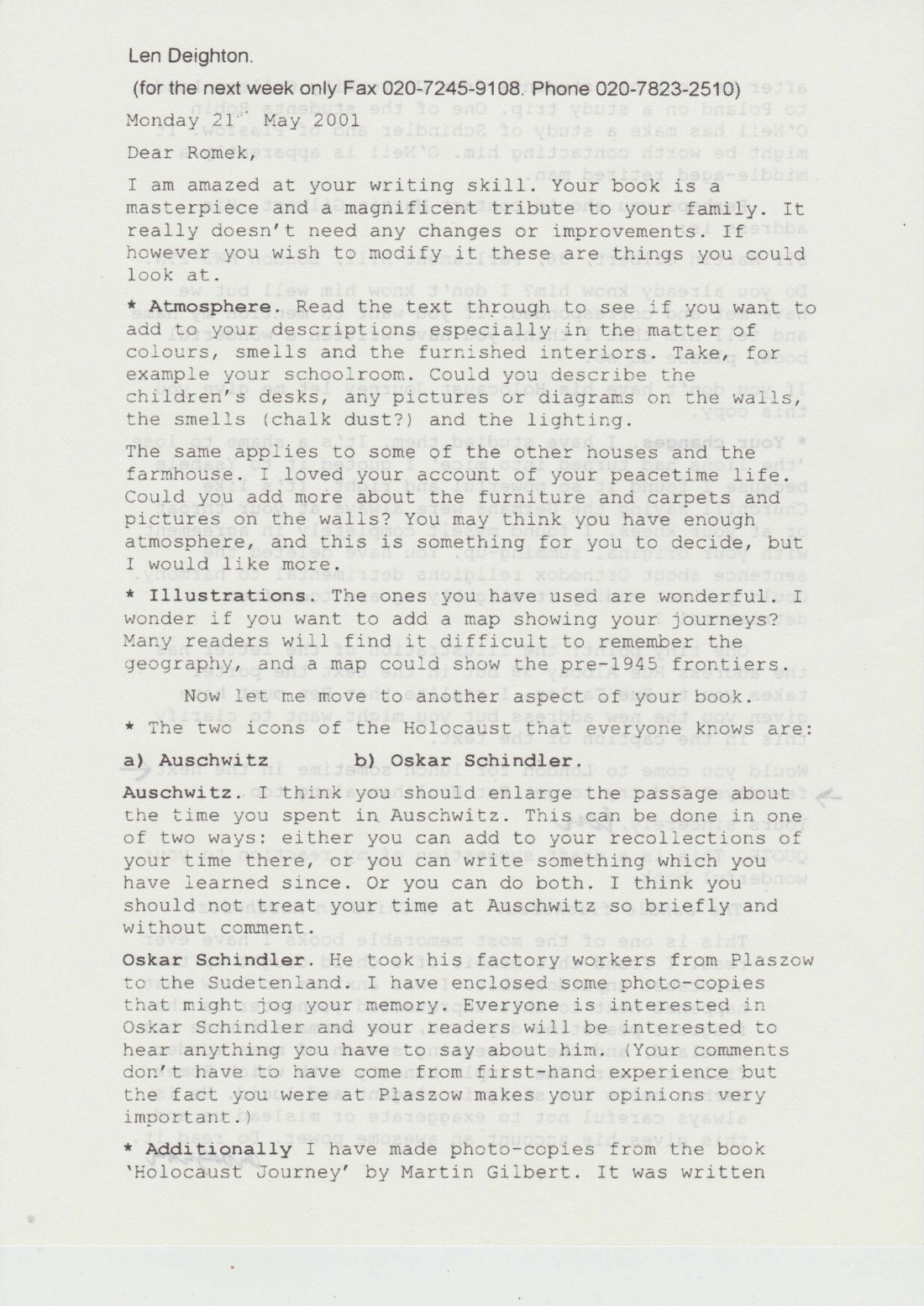 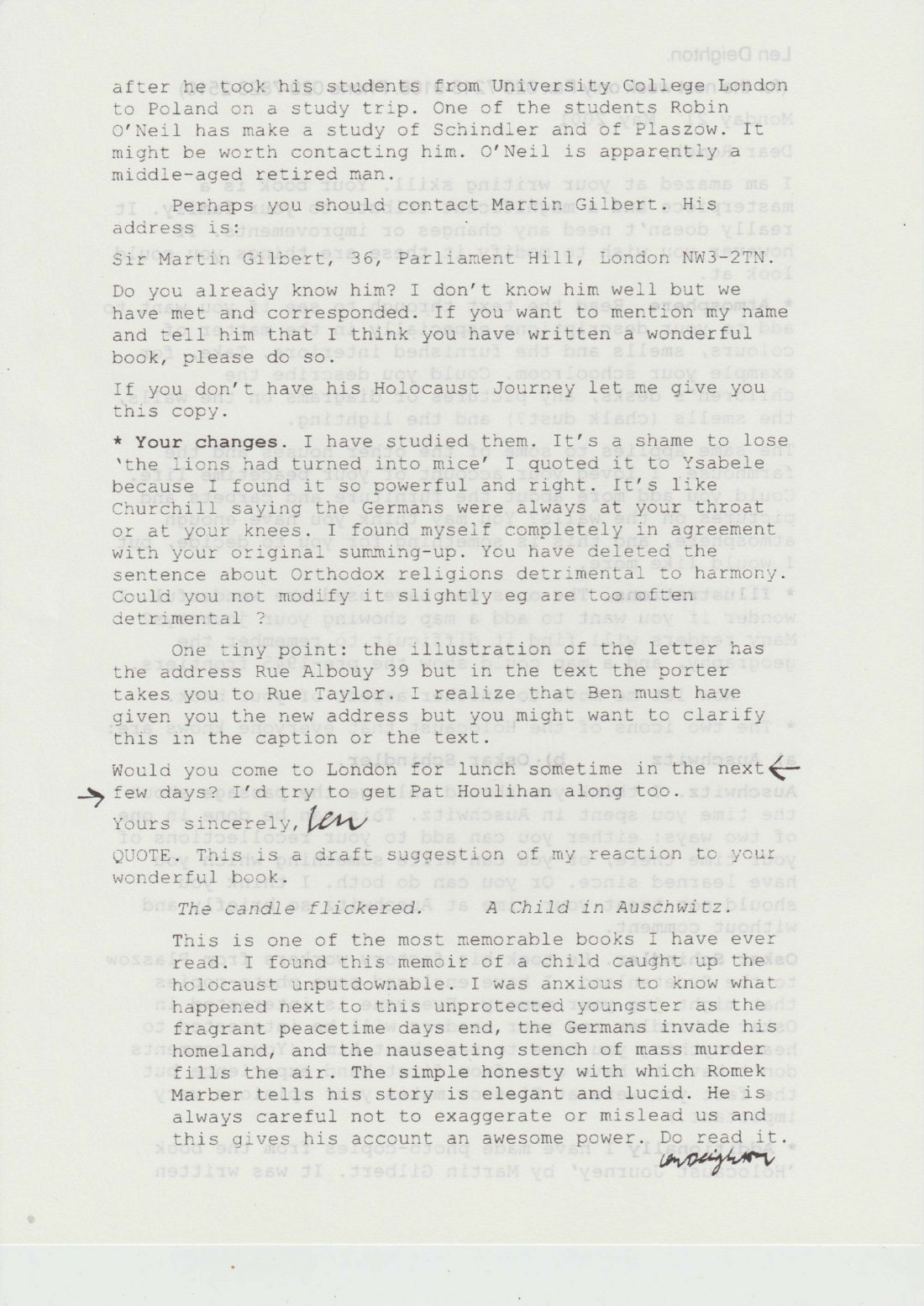 No Return: Journeys in the Holocaust

I had known Romek since the early 1960s and when I met Romek again we had not seen one another for some years. He mentioned that he had written an account of his experiences in World War II for his family. I said that I would like to read it, and a few days later a large plastic-bound typewritten copy arrived in the mail. It was clear to me that this should become a book.

Preparing Romek’s typescript for publishing took several months. Romek and I exchanged notes, he supplied the illustrations and read the text at several stages. In some cases the original sequence needed rearrangement for the sake of clarity, some digressions and repetitions taken out and some later sections, after Romek left Germany, were shortened. He supplied all the photographs, which were inserted early in the book to identify members of the family.

Romek’s life story speaks for the countless numbers of those who endured unspeakable horrors, for whom there could be no return. Read more

Read the complete book No Return below
No Return is now out of print but can be read by clicking on the book cover below. It was Romek’s wish that the book would be available to as wide an audience as possible, and would continue to use the original design by Richard Hollis. Richard Hollis and Five Leaves Publications have generously allowed the book to be reproduced in full. Text © The Estate of Romek Marber. Cover and book design © Richard Hollis. Click to read No Return 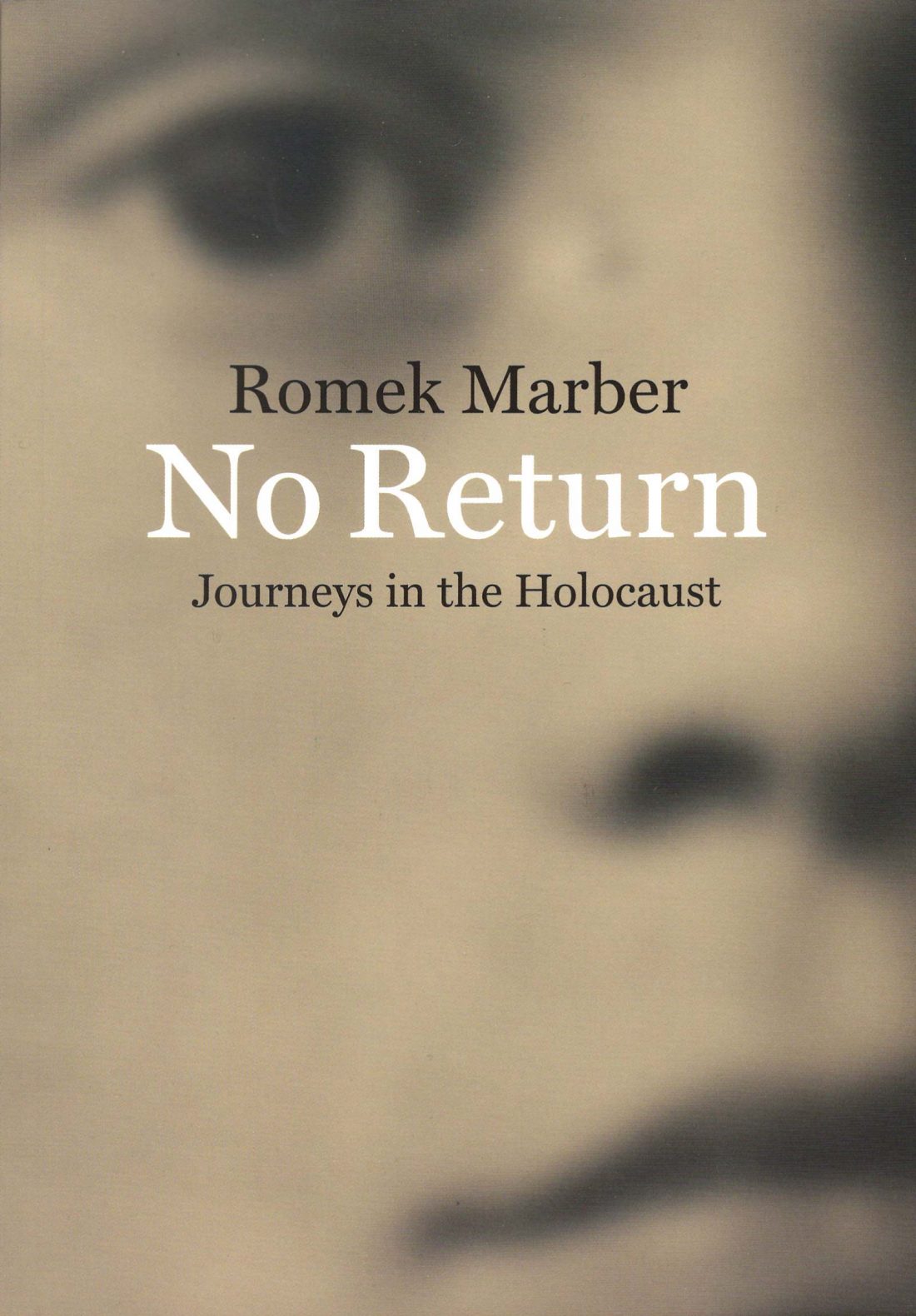 Click to read No Return
Second Class Students, 1938-39 Gimnazjum Teomity Skladkowskiej, Turek, Poland. In the photograph are Romek and his twin sister Roma Rachel Marber. Roma and Romek’s mother Bronka Marber (née Szajniak) died possibly 24 August 1942 in the Belzec Extermination Camp, Poland.
We use cookies to give you the best experience. Let us know you agree. Accept